The first half of 2022 was not a good time. Oh sure, most of us had been through hell of one kind or another since the pandemic struck. But as many were already getting back on their feet, I was pushed closer and closer to my breaking point by--what else?--changing conditions at my workplace.

When the pandemic hit, and those of us in a typical office workplace were ordered to retreat to our homes and resume working from there, I'll admit that I quickly found myself living my best life.  With expenses curtailed, my prized Dodge Challenger able to rest in the garage except for weekend cruises, and my social anxiety assuaged by the isolation in the comfort of my home, my stress levels actually started to recede.

But when my employer was acquired by a larger company in 2021, leadership--and the working environment--began to change.  We had always been a small IT team kept perpetually busy, but at nearly the drop of a hat, we were thrust into a hellscape of overwork and understaffing, with several additional layers of management taking us on a careening roller coaster ride of unclear objectives and never-saw-that-coming decisions.

I tried to tough it out for ten long months, and attempted to make my frustrations known along the way, but upper management started taking a vindictive approach to "nonconformists" who dared show dissatisfaction with working conditions. After spending a lot of time and money trying to keep myself together mentally, and watching the quality of my life and marriage slip away on a daily basis, I eventually decided that I had to get out of this mess.

Getting hired into a senior software engineering position is not exactly a cakewalk; depending on the employer, you might have several rounds of panel interviews, live coding exercises, take-home programming challenges with time limits, or a combination of all these.  Going through that while also working 12-14 hour days (sometimes until 3 AM) and trying to keep it all secret from your current employer just about ended me.  At one point I became so dizzy with anxiety and exhaustion that I called out sick for the latter half of the day and collapsed in bed for the duration.

In the end, it only took me about 6 weeks and a couple series of interviews before I landed what has since proven itself to be a much healthier and more valuable job. I gave myself a couple of weeks between gigs to decompress, during which my whole family got out of dodge to completely separate from the stress of surroundings that had become all too familiar.

It was then that I found solace in the unlikeliest of places.

In spring of 2022, I escaped to Traverse City in northern Michigan for a week of badly-needed distance from work and responsibility.  Although the trip had been planned for some weeks, it hadn't originally been intended as a respite between jobs--the timing there was merely serendipitous. In so doing, I was able to visit one of the landmarks I've always had on my bucket list: Traverse City State Hospital, a historic mental asylum of Kirkbride design.

It might sound like a strange place to want to vacation, but I have long had a fascination with 19th and early 20th century institutional buildings, particularly hospitals.  Among the most renowned designers of mental institutions was Dr. Thomas Kirkbride, whose standardized designs called for wards arranged in a staggered "bat wings" style so that each could receive ample amounts of natural light and fresh air.  Of the 70-odd Kirkbride-plan hospitals built in the United States, about 30 remain, many of which are falling to ruin.  Traverse City State Hospital (TCSH) isn't one of them; in fact, it is being restored and turned into a master-planned community and business hub by The Minervini Group.

There is some debate to be had about the moral/ethical ramifications of commercializing a place that saw so much suffering through the years--and where perhaps some of that suffering was perpetrated by misguided or even malicious practitioners or state departments.  Nonetheless, the historical value of the property remains inestimable.  Unlike most 19th century state hospitals, TCSH actually offers tours of the grounds and the historic buildings, and I most definitely booked one.  I took the photos seen in this article during that tour, including the one above, which features one of the hospital's underground tunnels that were often used by staff and patients to travel between buildings during northern Michigan's harsh winter months.

For many years I've watched wistfully from afar those videos by urban explorers like The Proper People as they've wandered (often without permission) through buildings like these, so seeing one in person--even in the much more controlled and somewhat sterile capacity of a legitimate tour--was amazing.  It was about as far away as you can fathom from the clinical practice of software engineering and the technical details I'm so often buried in.  It allowed me to think and feel in ways that I'd not had the luxury of for years.  And it was exactly what I needed right then, at that exact moment in my life.

Beyond just the hospital, we had a very relaxing and memorable stay in Traverse City.  My parents had booked through Vrbo a little cottage right on Spider Lake, and we were able to take in the fresh air, beautiful scenery, historic downtown, and empty roads of the northernmost tip of Michigan's lower peninsula for several days.

I had originally hoped that I would get to see my old high school friends during that trip, but I had to get back home to start my new job, and didn't have enough time to do much of anything around the old home front.  However, I think this deviation from the norm--the literal "getting away from it all"--was critical for me at that time.  The absolute hell I went through for over half a year at the last place I worked was not only enough to force me to take such a vacation, but also to (hopefully) teach me some things that will help me avoid falling into similar circumstances again.

At least I visited the state hospital as a tourist instead of as a patient.  God knows if I'd lived a hundred years ago, with my particular emotional idiosyncrasies, I may not have been so lucky.

The parting shot below was taken on one of our last evenings in the Traverse City area, and is emblematic of the calm and contentment that I found there.  That short trip may very well have saved my sanity.

The company I work for now is different from any previous employer in my two-decades-long career in IT.  It's a major corporation, which provides great benefits and staffs multiple teams adequately enough to maintain and build upon its solutions without grinding individual team members into dust with a constant overload of responsibility.  Its products are needed and desired, and provide a tangible public service.  It follows most modern software development practices, and while though there is always room for improvement, it does this better than any shop I've worked before.

Within only four months of working here, I've already been recognized by the chief engineer, all of the engineering team managers, and some of the tech leads on other teams as an exceptional contributor.  The company has a system by which good deeds are rewarded with recognition, and after enough of these events, you actually get a cash bonus.  You're entitled to a maximum of a certain number of these bonuses per year, and I've already hit the cap.  This week I found out I'm being moved to another team because they are in need of more quality-minded collaborative thinkers there, with a potential avenue for promotion.

This of course is always a bit of a double-edged sword for me.  I'm one of those engineers who would be perfectly content sitting down here in the proverbial engine room, developing solutions and helping troubleshoot problems for the rest of my career.  Although I am continually recognized by every one of my employers as someone with leadership skills who is trustworthy enough for the inner circle, actually serving in a position of high responsibility usually applies incredible amounts of stress.  As someone who has been somewhat neurodivergent his entire life, I long ago devised ways of internalizing how much I struggle with career situations that many would consider common (a social survival strategy that is often called "masking").  This leads me to do what I think is expected of me at work, and often sees me pushing past my own safety limits to avoid disappointing superiors.  It's what gives me the reputation for going "above and beyond" that I've had my entire career.  That sounds great from the outside looking in, but the sick part of the joke is that I can't turn it the hell off.

So as I move forward in this next phase of my career, I hope that the close encounter with nervous breakdown that I had earlier this year has taught me a few things.  Namely, that I need to make sure I set boundaries, even if my paranoid brain thinks it'll make me "look bad."  I need to speak up, or seek help, if things are getting out of control.  And if I don't understand something, I should ask others if they can help shed some light, instead of slaving away for hours alone because I'm afraid to admit that I wasn't born with infinite knowledge.

I feel like I've already done pretty well on point #3--I've jumped in anywhere and everywhere at work, asking questions and seeking understanding--which ironically got me noticed (positively) by upper management even earlier than usual.  Now if I can bring points #1 and #2 to bear, hopefully, I can keep the pace of my career growth (and my responsibilities) manageable.

The alternative is to undergo another metal collapse like this old brick wall at Traverse City State Hospital.  That's definitely not on my bucket list.

One final word: this is the first post of a new direction that I'm taking for this blog. Although blogging is almost entirely passé in 2022, I still feel like it's the ideal way to communicate my thoughts and use writing as the emotional outlet that it's always been for me.  While the chief argument against blogging (then and now) is that it was a pointless waste of space filled with text no one cares about, I've always been very content with small audiences for my work--even audiences of one; myself alone.  I've never measured anything I've done creatively by someone else's yard stick, and after forty years of life on this planet, I'm certainly not going to start now.

So what am I going to talk about here?  The menu includes software engineering, urban exploring, car culture, video games, PC hardware, synthwave music, and random nostalgic ramblings about the 1980s and even earlier decades that I never saw. While I get the blog back off the ground, you can also check out my Twitter for hot takes, quippy bloviations and stupid comic stylings.

If you'd like to join me in this little corner of the coffee house known as the Internet, save a bookmark or sign up to be notified of new posts.  And I'll see you in the next one. 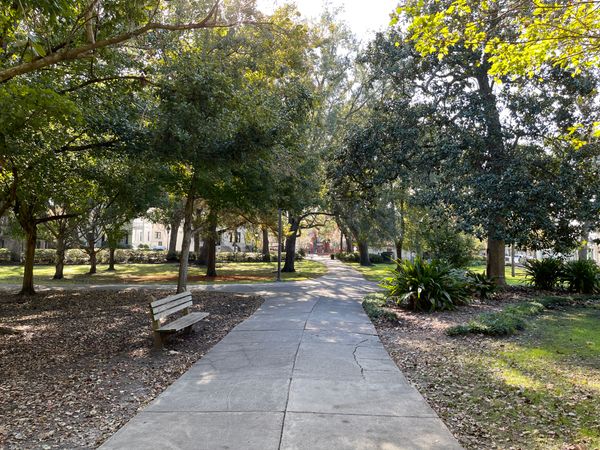 At some point during my youth, I remember being asked if I preferred books set in the historic past, or in a sci-fi future.  Naturally, I chose the latter.  Why would you want to spend a bunch of time looking backwards when there was this exciting, hopeful, speculative future to